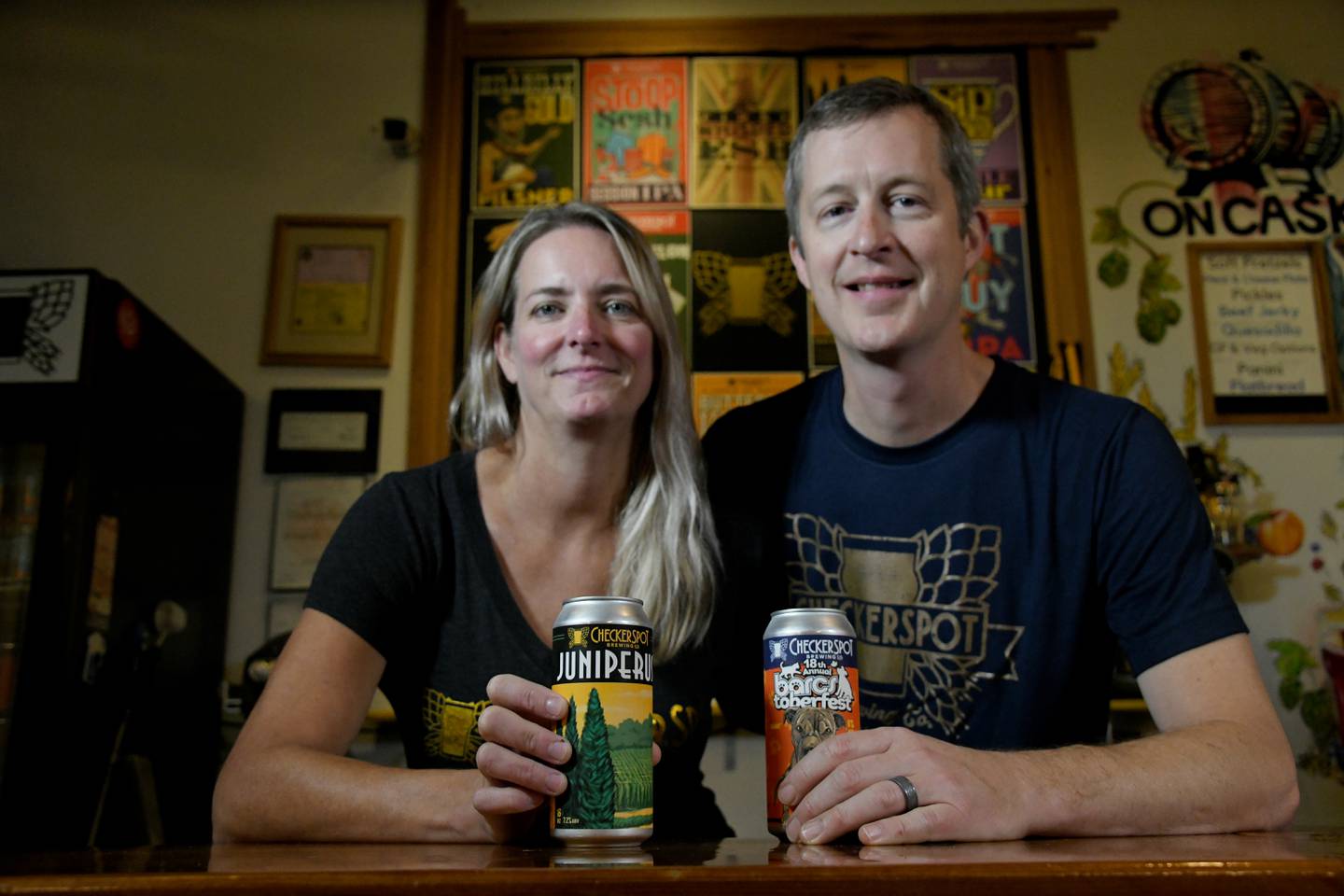 Judy and Rob Neff, owners of South Baltimore’s Checkerspot Brewing Co., in the taproom. Judy is a brewer and Rob is head of sales and distribution. The company is the winner of Sam Adams’ 2022 Brewing the American Dream Brewer Experienceship, a mentorship program that helps with the company’s growth. (Kim Hairston/Baltimore Sun )

Judy Neff started brewing out of her basement 17 years ago. Soon, she’ll be brewing with national beer giant Samuel Adams.

Checkerspot Brewing Co., the South Baltimore brewery that Neff runs with her husband, Rob Neff, is the winner of Samuel Adams’ 11th annual Brewer Experienceship, a philanthropic program that links one craft brewery a year with loan opportunities and mentorship from Samuel Adams’ Boston-based experts.

Keep an eye out for a joint Samuel Adams/Checkerspot beer release, too: The program offers winning breweries a chance to collaborate with Samuel Adams brewers on a beer that will be distributed in several states, including Maryland.

Checkerspot was chosen from a pool of more than 50 breweries that applied to participate in the program this year. In September, the Neffs traveled to New York City to take part in the Crafting Dreams Beer Bash, where the contest’s five finalists served beer and shared their stories with brewing enthusiasts and a panel of Samuel Adams judges. This week, the couple flew to Denver, Colorado for the Great American Beer Festival, where Samuel Adams officials unveiled them as the winners.

The win comes at a pivotal time for the four-year-old brewery. The Neffs recently purchased a new building for Checkerspot a couple blocks from their existing one, and shared plans to relocate and expand before the end of next summer.

“The timing couldn’t possibly have been better,” Judy Neff said. “Sometimes, I have to pinch myself.”

Checkerspot Brewing Co. opened in 2018, but Neff had already been experimenting with craft brews for more than a decade before that.

She started to seriously consider launching a brewery of her own in 2016. At the time, Neff, who has a doctorate in microbiology, was running a laboratory for a startup company and her husband, an engineer, was rehabbing houses. When the startup began to flounder, “the writing was on the wall,” Neff said. “I knew I needed to look for a new job.”

The couple decided to take the plunge and open Checkerspot, named for the black-and-orange butterfly that is Maryland’s official state insect. They rented space at 1399 Sharp St., a few blocks from M&T Bank Stadium, and set to work designing the brewery. Though the Neffs initially hoped to open in 2017, construction delays pushed back the brewery’s debut to June 2018.

In the four years since, Checkerspot has steadily grown to become a favorite on the local craft brewing scene. Thanks to its proximity to the Ravens’ and Orioles’ stadiums, the taproom is a hub for sports fans on game days. During the pandemic, the brewery’s outdoor patio and a sprawling temporary seating space in the parking lot across the street drew beer drinkers eager for a COVID-cautious outing.

The brewery is known for its wide variety of beers: Checkerspot’s 15 taps serve everything from IPAs to kettle sours, a chamomile saison and barrel-aged, Belgian-style brews. On a recent morning, the Neffs were hard at work on their latest project, a collaboration beer with the Honduran brewery Cerveceria Dos Osos. The porter, which will be distributed in both Maryland and Honduras, is brewed with coffee and cacao nibs.

Like its peers, Checkerspot struggled with supply chain shortages and the rising cost of brewing ingredients wrought by the pandemic. But the past 2 1/2 years have also been a time of expansion. The brewery added a canning line and two new barrel fermenters in late 2020, increasing its production capacity by more than 60% and landing its beers on liquor store shelves.

“It’s been hard to compare one year to the next,” Judy Neff said. “You learn how to roll with the punches, and keep on going, and we came out of it strong.”

The brewery’s new connection to Samuel Adams will help guide a fresh period of growth.

This summer, the Neffs bought a new home for Checkerspot Brewing. Before the brewery’s lease on Sharp Street expires next June, they plan to move their taproom and brewing equipment a few blocks away to 1421 Ridgely St. The 24,000-square-foot building was once home to printing company J.W. Boarman, and the couple plan to retrofit 18,000 square feet of that space with rolling garage doors, an outdoor seating area and “a lot more windows.”

“We really want a lot of fresh air and light, and things that the building doesn’t have now,” Judy Neff said.

She plans to turn to mentors at Samuel Adams for advice on increasing the brewery’s sales reach, managing Checkerspot’s growth — and anything else that bubbles up along the way.

Jennifer Glanville, a brewer for Samuel Adams and the company’s director of partnerships, was among the judges on the panel that selected Checkerspot Brewing Co. for this year’s Brewer Experienceship. As a woman in an industry dominated by men, she said she appreciated Judy Neff’s leadership in the Baltimore beer scene. On top of being Checkerspot’s head brewer, Neff is also a founder of Baltimore Beer Babes, a group that brings women together to drink beer and talk about brewing.

“She’s been a pioneer in the area,” Glanville said.

Since it was founded in 2008, Samuel Adams’ Brewing the Dream philanthropic arm has helped connect breweries and food and beverage companies across the U.S. with some $86 million in loans, according to the beer company. Brewer Experienceship mentors stay in touch with breweries even after the yearlong program is through, Glanville said.

Checkerspot’s own philanthropic efforts appealed to the judges, too. The Neffs are avid dog lovers, and brew an annual BARCStoberfest beer to raise money for pets at the BARCS animal shelter. They also support the Baltimore Military Muster, an event for veterans.

“What I love to see is people taking a leap with their passion,” Glanville said. “Judy embodies that perfectly: She felt she could make not only great beer but impact her community. To me, that’s what American dreams are made of.”