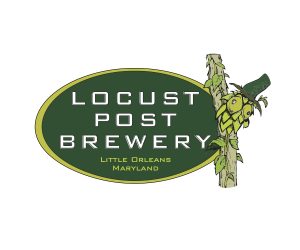 Locust Post Brewery is a Western Maryland farm brewery founded by Tony and Denise Cornwell, who operate their venture in Little Orleans. The Cornwells, both artists, leveraged their combined talents (Tony is a home improvement contractor, and Denise, an accountant by trade) in the construction of the brewery on their 26-acre farmstead situated not too far off I-68, east of Sideling Hill, about halfway between Cumberland and Hagerstown. Design and build from the ground up incorporates repurposed and upcycled materials, both in the fabric of the structure and the artwork created by the Cornwells and others on the property. The brewery derives its name from the Black Locust posts used as anchor poles for hop bines being grown next to the brewing facility / tasting room.

It is intended that the brewery will produce a wide variety of beers, designed by Lincoln Wilkins, who is brewing them on a new 5bbl system with the help of owner Tony Cornwell, and his nephew Billy Bender. Lincoln is an award-winning brewer, with 12 yrs experience, most recently at his former venture, the Blackwater Brewing Company in Davis, WV. His background portends a lineup of solid traditional European ales and lagers, spanning the range from light to dark, interspersed with American-style IPAs and seasonal offerings incorporating flavor elements derived from the Cornwell’s farmland. A canning line and local distribution are in the works for future expansion.