National Premium Beer to be brewed in Baltimore 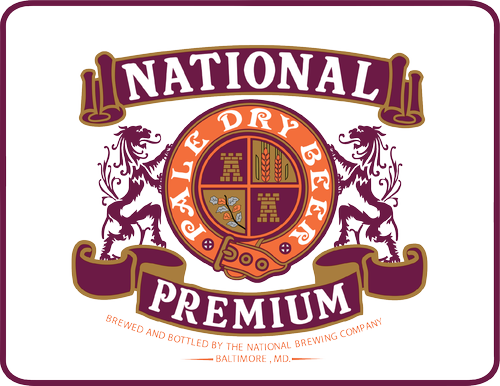 For the first time since 1996, National Premium Beer will be manufactured in Baltimore.

“Natty Preme” – known as the ritzy brother to local favorite National Bohemian or “Natty Boh” – was originally brewed by The National Brewing Company in Baltimore’s Highlandtown neighborhood, along with Natty Boh and Colt 45. When the facility shuttered in the late 1970’s, production picked back up in Halethorpe in Baltimore County, where it remained until 1996. And while Natty Boh and Colt 45 have both since been brewed by Pabst, the same cannot be said for National Premium, which was discontinued.

That is until Tim Miller, a realtor and entrepreneur based in Talbot County, had an idea. While attending an auction in New York, Miller purchased the “dead” National Premium trademark. But why stop there? If he could revive the brand’s merchandise with the famous logo, why not revive the entire beer?

“[Premium’s] going to be a Maryland-owned beer again,” Miller told the Baltimore Sun, after his purchase in 2011. By the following year, Miller had acquired the recipe and the pilsner production was up-and-running in a Delaware brewery.

Now a decade later, Miller’s vision is taking on a new life with help from a Baltimore brewing partnership.

Heavy Seas, a company that has been brewing craft beer in Maryland for more than two decades, has teamed up with Miller to bring back brewing the iconic recipe in Halethorpe. The partnership is a perfect match—the Sun once reported that Heavy Seas’ Classic Lager was the closest copy to Premium’s original recipe, albeit with a few differences.

More than 25 years may have passed, but the feeling National Premium brings to the Baltimore community is expected to remain the same – with a nostalgic look, a familiar taste, and a flurry of memories for those who remember the original manufacturing plant.

“People love beer…They love hearing stories about it. I’ve found they want to know everything they can about National Premium,” Miller told Beverage Journal. “The questions and stories keep coming, too. I’ll get, ‘Oh, my grandfather was a pipe fitter at the original brewery.’ There’s always some kind of connection.”

On October 14, Heavy Seas is hosting a release party for the beer’s official return to Baltimore. More information is expected to be released on The National Premium Beer website.