Maryland pride. It’s a big thing. For people who’ve grown up here or lived here for years, maybe you’re used to it, or maybe you even take it for granted. But, as someone who is relatively new to Maryland, let me tell you – there aren’t many states like this. People aren’t just looking to buy products because they’re local, but because the products are from Maryland. The Maryland flag has been made into pants, purses, sunglasses and used as marketing on countless products made here. It’s obvious; people take great pride in being a part of the Maryland community.

As a relatively new Marylander, I’ve made it a point over the lsitast few months to focus on trying as many Maryland beers from as many Maryland breweries as I could, and I’ve been very impressed.  There’s a lot to choose from, and a lot of very good beer – and not just from the bigger craft names here in the state. One of the breweries that really stood out to me early on was Calvert Brewing Company.

Earlier this month I had a chance to visit the brewery and talk with Calvert’s head brewer, Matthew Ducey, about Maryland pride, commitment to community, planning their business and, as they like to say at Calvert Brewing Company, “Building a better beer.” 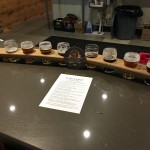 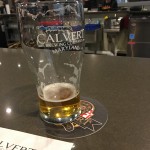 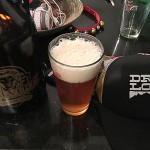 Building a better beer isn’t just a slogan; it’s something they’re working on every day. My first run-in with their beer was back in April when I stopped at a pub in Pasadena, Maryland, that had the Calvert Cream Ale on a nitro tap. It was smooth, crisp, refreshing and just slightly bitter at the end – a very balanced brew. It got my attention and I was on the lookout for their stuff from that point on.

I came across six-packs of their Good Company Pale Ale and their Route 4 IPA at a bottle shop near my house, and was very pleased with those as well, especially the pale ale. It had a nice hop flavor without being too hop forward; like their Cream Ale, this beer was very balanced. And though I didn’t know it yet, I’d soon realize that well-balanced beers are kind of Calvert’s thing.

Ducey describes Calvert’s Wye Rye, Good Company Pale Ale, IPA and Cream Ale, their “core four,” as more traditional “modest and well-behaved” beers.  “We’ve taken what has been successful, traditional and classic and built upon it,” Ducey said. “We like to make the flavors balanced and easy”

But, if you’re into beers that are a little more adventurous, don’t worry, there’s something here for you as well; they tend to get little more experimental with their pilot system, which allows them to test recipes – and if you come down to the tasting room, you can check them out. Of those, I really enjoyed the Flapjack Maple Milk Stout and the Mortal IPA, which is a tasty tropical fruit bomb. It’s a double, and it comes in at 9 percent ABV, yet it isn’t overpowering in either the booze or bitterness department.

And while the beer is why we’re here, the brewery itself is a destination location. Owners Mike Scarborough and Kevin Owen, who started brewing on their farm and vineyard in Prince Frederick, just opened this space in Upper Marlboro about a year ago. It’s their production facility, but it also houses a good sized tap room, with a big horseshoe bar, a bunch of tables and depending on the day, a food truck or two outside.

While this facility is in Prince George’s County, the brewery is named after the Calvert Family, and the original farm brewery is in Calvert County. The name Calvert Brewing Company is not “just a nod to where we’re coming from, but really the state that we care about,” Ducey said.

Calvert Brewing Company’s goal, before worrying about expanding their distribution, is to fully serve the people of Maryland, Ducey said. As of right now, aside from Washington D.C., their beer is available only in state.

Even with all the great breweries here, there’s still plenty of room in the market when it comes to Maryland beer, Ducey said. “Analytics tell us that Maryland as a market is underserved – competition is tough, sure, but there’s room to grow.”

“We have a lot of empty space, we’ve done a lot of construction ahead of time to prepare ourselves for expansion, Ducey explained.  “When we were in the process of planning the brewery, we visited a lot of brewpubs and saw what was cool and wasn’t cool. We saw a problem that arose for breweries that made good product. Too often brewpubs would hit capacity and need to leave.”

“We saw it over and over; breweries that make good beer sold more beer and had to expand. You start within the limitations of your budget, buy what you can afford, hit success and then had to leave. All we want to do is not leave, so we invested a lot of our budget into space we’re not even using yet,” Ducey said. “We didn’t want to sit into a community, develop relationships in that community, and then abandon them.”

Calvert’s current capacity sits at 12,000 barrels annually, but they have already laid the groundwork to be able to expand to 46,000 barrels when the time is right.  They also have room in the building to expand further to 80,000-90,000 if the demand is there.

The pride Calvert Brewing takes in the local community is evident. They host various events at both the taproom in Upper Marlboro and at the beer garden on the Prince Frederick farm, including concerts, trivia nights and a monthly “Thirsty Mutt Thursday” where you can bring your dog to the brewery and 10 percent of the proceeds benefit a local animal shelter.  They also offer contract brewing opportunities, because, as Calvert says, “we believe that Building a Better Beer includes helping out other breweries.”

Calvert also uses social media to connect to their community and customers. In fact, back when I first discovered Calvert’s beer, I noticed that they were very quick to respond or acknowledge any mentions on Twitter or Untappd about me drinking one of their beers. That type of engagement, to me, is important when building a customer base. It shows that they’re interested in what their customers think about their product, and that direct interaction can be an effective way to build a sense of community.

To Calvert, community isn’t just the people buying their beer, but it’s also other Maryland brewers. “People in the industry (here in Maryland) generally work together, if I had a question, they’d answer it,” Ducey said, highlighting Jailbreak, Burley Oak, Monument City and Diamondback as other brewers he interacts with. “It’s friendly. Producing beer in Maryland for Maryland is a bond.”

Calvert Brewing Company, like many of the other breweries here, takes great pride, not only in their work and their products, but in the fact that they’re serving the people of Maryland.  What do you all think? Have you visited either of Calvert’s locations? Are there other must-see breweries or tasting rooms in the state? Tell me about it using #thegoodwort on Twitter. Also, you can follow me and my beer adventures on Twitter and Snapchat @therealeshirk, you can email me at therealeshirk@gmail.com, and be sure to keep up with the Brewers Association of Maryland @MDBrewers.